This training cycle was solid.  It was my first full cycle since my miserable showing at Tobacco Road in 2013.  It was time to try and slay the BQ dragon once and for all.  I was solid on my workouts and the long run’s began to fall into place.  4 20+ mile runs this cycle culminating with a 24 miler 3 weeks out.  Just before this a buddy Matt Williams noticed that my easy days weren’t easy enough.  He brought that to my attention and I’m forever grateful he did.  After that, several other running pals agreed with his assessment.  So, on my easy days I switched from “how I feel” runs to HR based runs.  I believe this made a difference and I’ll follow this philosophy moving forward.  Now, it was taper time.  I felt like I was in 3:07-3:08 shape.  All I had to do was not get sick (which isn’t a given in a house with 5 boys). 🙂  If healthy the only thing that could stop me now was the weather.  10 days out I started looking at the forecast for Charleston.  It was less than ideal, I became very anxious.  Mid-50’s at the start climbing about 10 degrees throughout the race and 97% humidity.  I had run this race in 2012 and 2013 and both times starts were in the high-30’s, near perfect.  I continued to monitor and not much changed.

Based on the weather I had to decide how to play this race.  My goal was to BQ.  Stretch goal was to PR (<3:10:55) and perfect day goal was 3:08.  This was no perfect day, but could I still PR?  I honestly didn’t know.  At this point in race prep if my cycle went well like this one did I’m usually very excited and confident for the race.  Not this time though.  I was unusually pensive.  The weather was the variable I had no control over, all I could do was run.

The drive down Friday was good, the whole fam in tow and they were all excited.  I was also told, “no BQ, no ride home”, so that was solid motivation. 🙂  Based on the forecast I’d been hydrating like a boss all week.  This meant an inappropriate number of bathroom stops for a relatively short trip.  I’d also been increasing the carbs during the week and was beginning to feel like the Goodyear blimp.  I HATE CARB LOADING.  Especially this time because my normal diet through training had been high protein, low carbs.  I knew though that hydration would be every bit as important as carbs with the humidity.  I pounded coconut water all week too which turned out to work quite well.  We rolled in and went to the Expo.  Ran into Chad Randolph there and picked up the essentials.  Then, we were off to Olive Garden for an early dinner.  4 breadsticks and a bowl of angel hair with olive oil, garlic and tomato’s later, I was done.

Continued drinking that night and through the night.  Slept unusually well for the night of a race for me.  Alarm went off at 5a.  I really wanted to try and not wake anyone else up and did a pretty masterful job if I do say so myself.  Although, that meant I consumed 20oz of water, followed by a Cytomax and Protein shake and plain bagel all while sitting in the bathroom with the door closed.  Had already gotten my clothes ready and dressed while hanging out there.  Then at 6a I headed downstairs to find a ride to the start.  Cab out front wanted $10 for a 1.8m ride.  I checked with Uber, they were half the rate.  Next thing I knew I was in the front seat of a Prius and on the way.  However, one major piece of my race day fuel was not yet complete.  I asked him where the closest Starbucks was so we made a quick detour for my Venti Pike Place.  Wanted this 1.5hours prior to the start.  Down the hatch and finally I was awake. 🙂

He drops me off close to Joe Riley Stadium and the HQ is inside the local HS.  It’s nice to have indoor bathrooms prior to a race.  I went in and just sat down for a bit.  Playing the race out in mind and what accomplishing this 6+ year goal finally would feel like.  I got an awesome text from Chas prior to the race which I’d remind myself of several times during the race.  “Don’t be an idiot at the start, and don’t be a coward at the end.”  I texted Derek May (who was pacing) to see if he was there yet.  He was on the way.  I finally decide to head outside and check my bag.  As I’m walking out the door I see Derek.  We chat for a second and literally as I was starting to walk away, he says, “Remember, 3:12 will be good enough.”  That was it, his words became my goal.  It wasn’t a “perfect” day and probably not a PR day either.  I knew this but his words helped me get there mentally.  So now, I focus on 3:12.  It accomplishes my BQ goal and hopefully good enough for getting accepted to Boston.  I also chatted with Wayne Eckert (who had a good race) on the way to bag drop. Drop my bag and head toward the start.  See Bobby Aswell close to the start and chat for a second.

It’s now 7:45a.  It is 53 degrees and 98% humidity with 52 degree dew point.  I had already eaten my banana and then ate my Hüma caffeine gel.  All my fuel was now onboard.  Last order of business was situating my gels for the race.  Since it was warmer I didn’t have many options for where to store my 6 gels.  I decided caffeinated gels in right compression sock and regulars in left.   This seemed like a good idea at the time, it wasn’t.

As I stood at the start line I was uncharacteristically devoid of any emotion.  It was just business at this point.  Fuel properly, run my race, keep pace in check and BQ was mine.  The gun sounds and I take off.  I positioned myself at the very front for gun time reasons.  I started off around 6:30, then began to fall back to my pace, being sure to not hold anyone up during that process.  Less than half of a mile in I begin to realize my gels in the socks plan wasn’t a great idea.  All three of the gels in my left sock began to push up on their way to falling out.  I don’t need this crap right now.  I grab all three and hold two in one hand and the third in the other.  Not off to a great start.  The ones in the right sock weren’t moving (and didn’t the whole race).  I get through that and settle in.  The first few miles I go through and am feeling good.  It is always my goal to get to mile 20 “feeling good”.  I make it through 10k in 45:29, right on pace.  It is me an another guy running side by side from about mile 4 through 10-ish.  Then a girl joined us and she and I were shoulder to shoulder until around mile 20.  Once I hit mile 20 (2:26:40) I assess my status.  Breathing good, legs good, nothing hurting.

It was around this time I got a few tears in my eyes thinking about what I was less than an hour from accomplishing.  I put a stop to that right away.  As anyone who has run a marathon knows, you can go from “good” to “far from good” in the blink of an eye.  I had to block everything out and get back to business.  Mile 21, 22, 23 ended up being my fastest at 7:09 (whoa boy, knock it off).  I couldn’t jeopardize this with pushing too hard and falling apart.  I backed it down the rest of the way to protect my goal.  Mile 26 was the slowest of the race.  I’m coming to mile 26 and begin to allow the smiles to be seen.  Just before the final turn I first see my step son cheering me on then my son is yelling for me and starts running in the grass next to me.  It was real and it was happening.  The best part is that the whole family was there for me to experience it with.  I’m pumping my arms at this point, the chute is in sight, now I see my wife and the three little guys off to my right. Huge smiles now and lots of tears.  I finished the last .2 sub 7:00 pace.  3:12:10 is my finishing time.  Nailed it!  BQ -2:50, now I just pray that’s enough to get me in for 2018.  As a nice bonus, I ended up winning my AG.  Finish time weather was 66 degrees and 70% humidity.

My oldest son (12) is the first to get to me and he tells me he’s proud of me and I give him a sweaty hug.  Then I make it over to my wife and the little guys.  I give the medal to my toddler who puts it on his neck.  I give my wife a sweaty hug and the tears flow.  WE did it.  She has been so awesome to support me and my running.  Fist bump from my other 12 yo and then I was off to get my bag where my protein/glutamine were waiting.

I have to say I was very pleased after the race at how good I felt.  It’s my 11th marathon and the first one I didn’t bonk in.  While yes, I was tired I definitely had more in the tank.  I’m so grateful to be in the club now and possibly be on my way to running in Boston as so many of you have already done.  See my race on Strava. 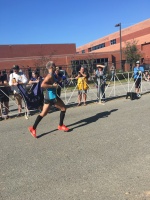