With today being President’s Day 4 of the 5 boys were out of school.  Heather was working and I was off, so I was on point today.  I drove carpool today while Heather was getting ready to go to the office.  On the way back I stopped by Dunkin Donuts and got a dozen Munchkins.  Great start to the day, right?  Jonah was really excited when I got back with the treats.  But it was Andrew who ate one after the other.  He was on a mission.  After that I loaded up the little’s and made the 20 minute ride to pick up G at 9a and then back home so I could finish up a few things around the house.

Coming up on lunch time I started the process of getting socks and shoes on, which isn’t all the simple.  I’m usually sweating by the time it’s complete.  So, as part of the ploy to get them to focus on this necessary task was to ask “Who wants to go to Chic-fil-A?”  Actually, as Jonah calls it, “Chicaflay”.  That got them motivated and we were on our way.

After a great lunch complete with obligatory playing in the indoor play zone we were off to our next stop.  I love running on the trails behind our local YMCA so I thought that would be a fun activity for a beautiful day like today.  Boys love being in the woods and today didn’t disappoint. 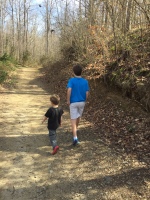 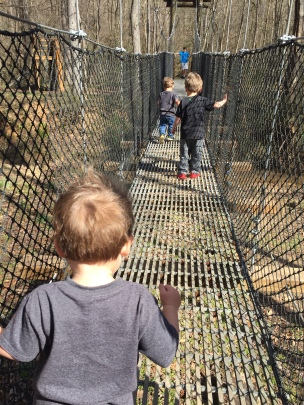 We hiked about a mile and played in the activity center.  Andrew was running a good bit of the time but Jonah didn’t want to be passed by him.

The cutest moment of the day came as Andrew came running toward Eli only to stop and hug him as he continued on.

I think all the boys had a blast and in fact all three of the little’s passed out once we got back in the car.

You can’t see Eli in the back, but trust me, he was out too.  Finally, Luke made it home from tennis after our dinner and baths for the little’s.  We had one more unfinished piece of business before we could end the day.  Our local Pelican’s Snoballs re-opened for the season today, so that was a “Must-Do”. 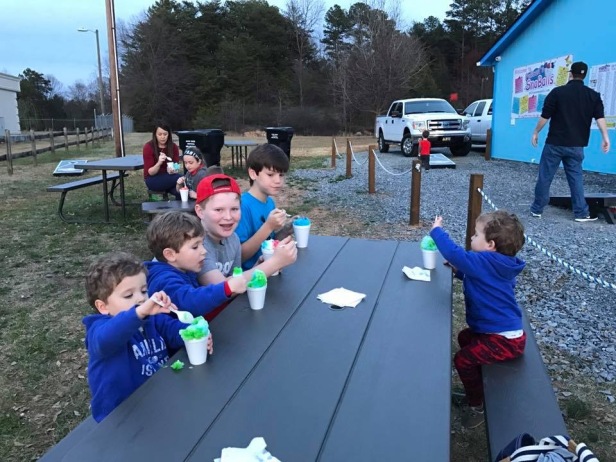 Overall great day, but I’m worn out and headed to bed now.  Yawns.